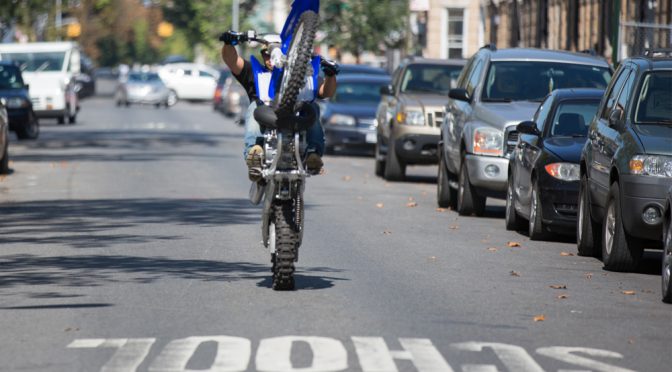 I’m struggling to work out where to start with this. Let me try.

We suffer from an epidemic of trail bikes here in Conisbrough. Young idiots (for that’s what they are) bombing around on illegal, uninsured, unlicensed motorcycles… on pavements, in alleyways, in the middle of public roads. These riders have no road sense or common sense – no sense of safety or consideration for other road users or pedestrians.

I doubt this is something unique to this town. I’m fairly sure this is a wide-ranging issue in towns the world over.

A few months back, I reported one such scro… uh, offender to South Yorkshire Police, using their incredibly encumbered online reporting tool. I explained what I saw, where I saw it, and the reasons why I felt that it was a crime that needed to be reported. I also expected no response. Ok, so my opinion on the local police isn’t that high, I admit.

Well, colour me surprised when I got a telephone call from South Yorkshire Police on a Saturday afternoon in May, responding to my complaint, and giving me the situation as it stands. This is where it gets interesting.

I am led to believe that South Yorkshire effectively has zero powers to combat illegal motorcyclists unless they can identify them and trace them down in person. They cannot pursue them at the point of incident because that would entice the rider to be even more erratic than they already were, and more likely to endanger themselves and others. They cannot sit and wait for them, obviously, as that’s not a good use of their time and resource. They can’t be identified by automated means, as these motorbikes do not display licence plates. If a member of the public reports an incident relating to illegal motorcycles, it can take days or even weeks for the police to response to such reports, rendering the activity of reporting it in the first place totally redundant.

This is why I saw two trail bikes hammering down Old Road in Conisbrough, well in excess of the 30mph speed limit, side-by-side (so one of them in the opposing lane), both of them pulling wheelies… basically because there’s no-one to stop them. I do find it interesting that almost every illegal rider chooses to wear a helmet and protective clothing, effectively putting everyone else in their path at risk, but themselves.

This is selfishness in its purest form. These riders are untraceable, uncatchable, and unaccountable.

My license for riding a motorcycle expired in the middle of 2014, and whilst I’m fully intending to take my full test at some point in the future, I can’t help that the reputation of motorcyclists – like myself – is being sullied by these illegal riders with no care for anyone but themselves.