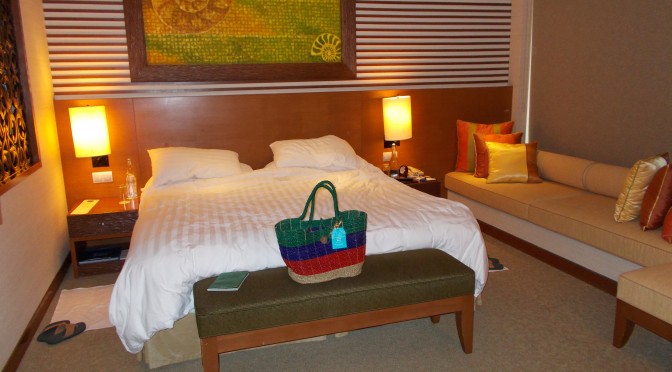 So, on Day 2, we find ourselves sitting on an Airbus 388 departing from Heathrow, bound for the Malaysian capital of Kuala Lumpur.

There’s not really a lot we can say about a 12½ hour flight, followed by a rushed transfer, a further 2½ hour flight, a 45 minute coach journey, and collapsing for bed. 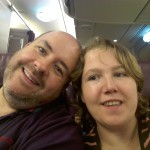 The journey from Heathrow to Kuala Lumpur took just over 12½ hours. We were fed well, looked after well, but the seats were really uncomfortable to sleep in. So for the most part we just watched films, listened to podcasts, watched old episodes of Mr Bean, or tried to get a small amount of sleep. I think that, in this flight, I might have had 2 hours sleep tops, and that was very light. And, of course, there was time for a quick selfie too. 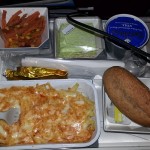 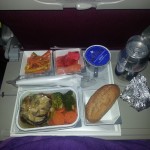 Breakfast on that flight was interesting, with a choice of macaroni cheese which I had, or some vegetable stack thingy that Caroline had. This was effectively at about 1530MST/0830BST so the idea of having breakfast – and the choices they had available – seemed really odd. However, the food was again really good.

So we arrived at Kuala Lumpur around 1800MST and had to run for the transfer as the gate for our onward travel was due to close at 1840MST. Well, firstly we got our instructions wrong and was waiting at the Transfer desk for about 5 minutes before we realised that we didn’t have to. So we got on the SkyTrain, which is an automated monorail shuttle between the main airport and the terminal. Down the stairs where we joined a long and very slow-moving queue for passport checks and security. The queue for passport checks was so incredibly slow that we thought we might miss our transfer. But after all was done, and I ended up with no belt on (again! – see Day 1) we ran, with me trying to hold my jeans up, to the boarding gate where we actually made it with time to spare.

An uneventful flight on a Boeing 737 for 2½ hours with a meal (no pictures though) we landed at Kota Kinabalu. We virtually sailed through customs and baggage, and were met in the arrivals lounge by a representative from our company and a couple of coaches for the 45 minute journey to our resort – Shangri La’s Rasa Ria Resort here in Kota Kinabalu – where we arrived at about 2230MST/1530BST. We were met from the coach by a drink and an incredible welcome from the resort staff, and we then went to our rooms. Incidentally, because there are 50-odd rooms in our booking, they actually checked us in and gave us our room keys whilst we were still on the coach, which I thought was a really nice touch. 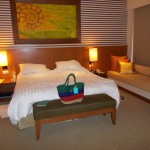 Once we were in our rooms, we got showered (first time in about 32 hours – eww!) and changed, and headed to the Garden Wing Lobby for drinks and a buffet with some of the other members of our party. We didn’t last that long, and headed back to the room to grab some sleep.

(On Day 3, we had a leisure and orientation day. I’ll post more about that tomorrow. It’s currently 0200MST on Saturday as I write this, and we have an early start tomorrow)